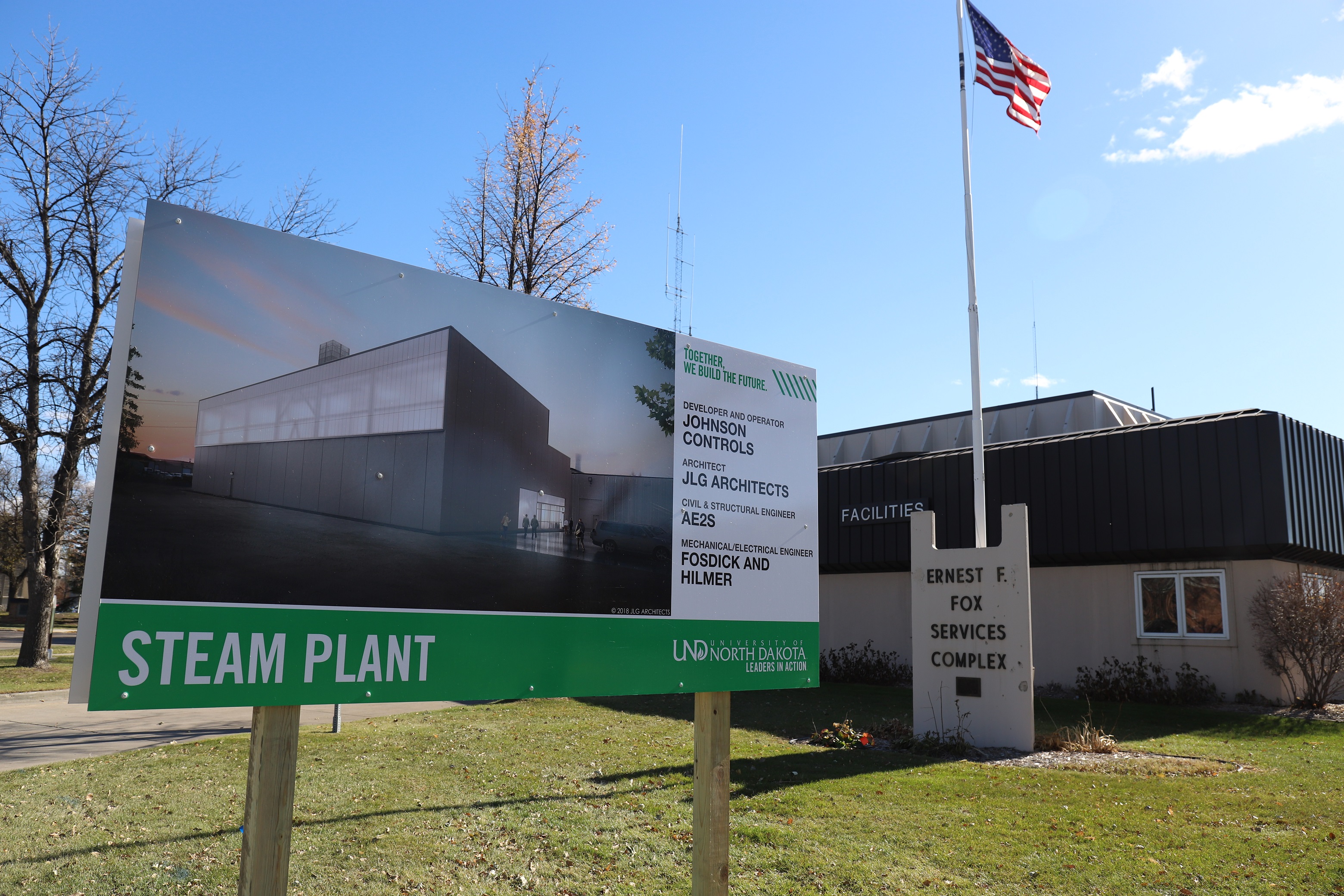 The University of North Dakota (UND) has entered into a 40-year partnership with Johnson Controls to replace its old steam plant and operate the new natural gas one. We spoke with Mike Pieper, UND’s Associate Vice President for Facilities, to learn more about the $195.8M project, the partnership, and lessons learned.

Please describe the partnership that the University of North Dakota (UND) is currently engaged in with Johnson Controls.

What was the genesis of the project?

Pieper: Some years ago, we had a major disruption in business with a flood, making us much more sensitive to that type of risk. A subsequent third-party facility conditions assessment showed the steam plant as being the worst building on campus.

We took a traditional run at going to the state legislature and asking for all the cash up front. But the economy had dried up, and the state couldn’t fund much capital improvement. We debated waiting for a couple years to ask again in the next legislative cycle, but that timeline didn’t line up with our needs.

Pieper: We did an RFP, looking for a partner that could serve as a lead firm. There was a lot of interest from a lot of organizations. Some wanted to build. Some wanted to design. But we wanted a lead firm—a single point of contact, who could then reach out to other partners.

We identified three firms. One was an alternative approach, but two had what we thought was the right solution. We picked Johnson Controls based on its background and experience with this type of issue. Johnson Controls pulled a team together with expertise in numerous areas—legal, engineering, project management, political, funding, and more—making a comprehensive team.

Can you talk about the financial aspect of UND’s partnership with Johnson Controls?

Pieper: It can seem a bit complicated. We have one line of payment that’s for the operations of the plant. We have a second line of payment back from Johnson Controls to pay the debt. And we have a third line of payment where we pay the procurement of the energy (meaning, we buy it direct). We worked it this way to balance predictable and unpredictable factors.

How did UND feel about pursuing an alternative form of procurement?

Pieper: We were pretty 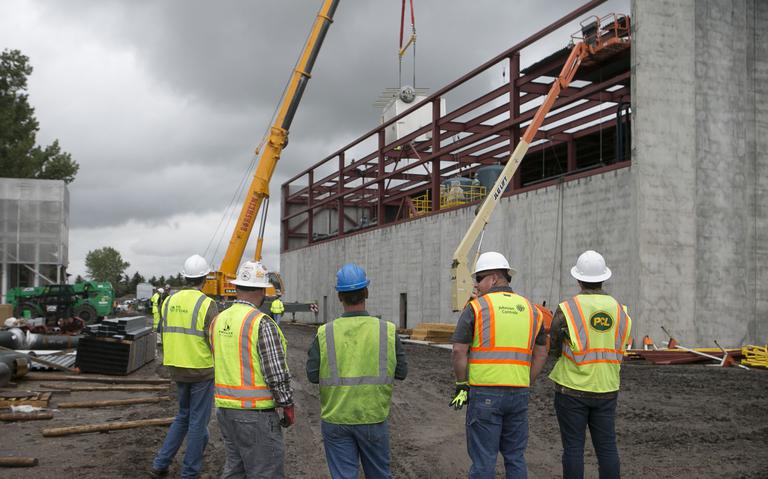 excited about the partnership. We put out there what we’d like to achieve, and in talking with Johnson Controls, it seemed like the numbers would work out in a way that meant we’d really meet our benchmarks.

UND also has a lot of other, direct academic needs, for example to keep up with expanding technology in the classroom. We didn’t want to limit our ability to deal with academic buildings, and didn’t want to rank this project above academic needs. So if we could accommodate it in an alternative way, that would allow us to go after additional projects.

That has really come true. We went from a pipeline of $0 to $350M, with potential for another $150M—all spurred on by the university’s new ability to find its own solution to a problem. And the positive outcome with some of our academic and student-type buildings—we did not expect to see movement so soon here.

Are there any additional benefits to the partnership?

Pieper: Timeline is certainly one. The state of North Dakota has a legislative session open to us every other year. With a two-year cycle, you can often be waiting for a while to take action. Ultimately, we figured we could deliver the project cheaper via partnership, rather than waiting two years to maybe get some subsidy from the state and to definitely pay inflationary costs.

Risk transfer is another benefit. It’s nice to have a large company like Johnson Controls, since they have a little bit more risk tolerance in some instances than a university might have.

And then actually addressing maintenance is another major benefit. Reinvestment costs on a capital asset are highly predictable. But if we don’t make that investment, we shouldn’t be surprised that we get an asset with deferred maintenance. So our contract with Johnson Controls works capital investment in across the 40 years. This way there won’t be any, Well, if we don’t do it this year, we can save money, and then maybe we do it in a year or two. We locked in the investment. It’s nice to not have to worry about outside influences taking that money away from the asset for other purposes.

Any drawbacks to the partnership?

Pieper: Certain partnership structures would not have worked—would not have been to our benefit or would have created drawbacks. But P3s can be done in unlimited ways. We did a lot of work, actually, before we even engaged private partners to understand what we had in the asset—to truly understand our costs to deliver steam, what we were charging, etc. I think that knowledge helped avoid surprises or having to work around drawbacks.

And then a potential drawback that we worked around successfully is personnel shifts when transferring operations from the school to the private partner. Because no school wants to disadvantage its employees, and no school wants to lose its employees’ institutional knowledge and technical know-how. So in our case, Johnson Controls is transferring over employees to bring their knowledge to the new plant. The hard part was navigating folks who were planning to retire before the new plant comes online. We’ve been lucky to work with them and get them on transition schedules so they work for another year and we sunset our operations a little more seamlessly. We are very thankful for our employees’ help in that.

How have you navigated buy-in and support more generally? 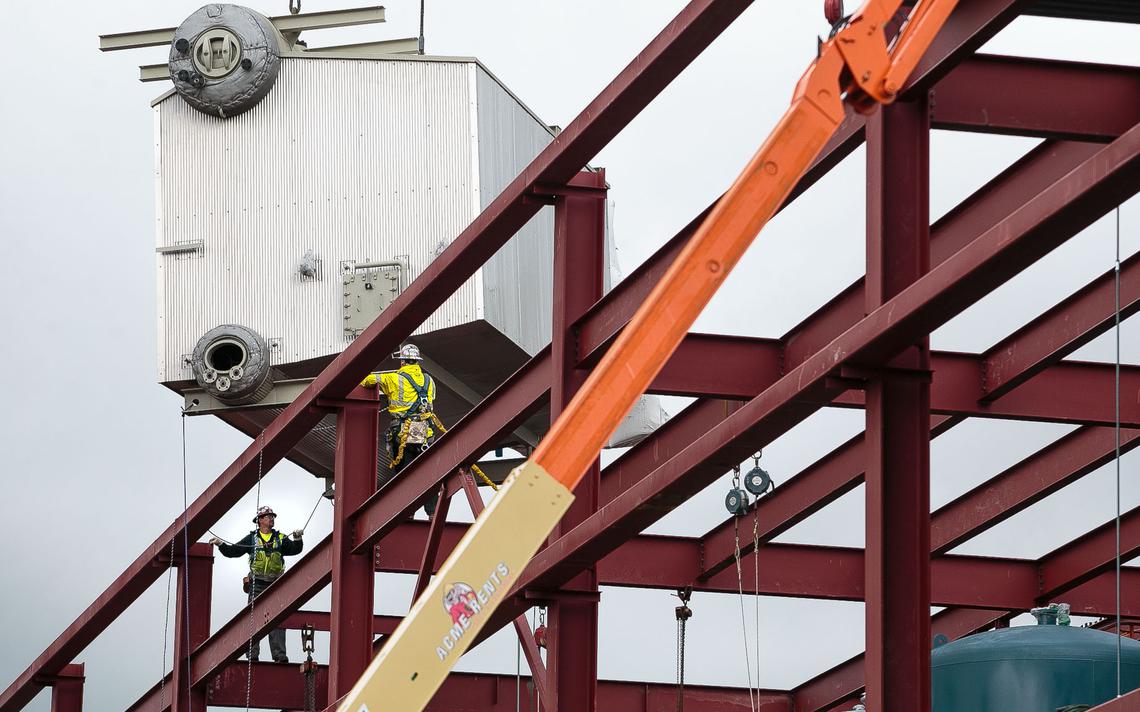 and support is crucial. For UND’s president, for example, a steam plant wasn’t necessarily a project he was in love with, it was a project he had to deal with. But our approach let him deal with more academic projects—and that’s where the buy-in from leadership really occurred. Otherwise we’re stuck in a numbers game showing we can do it, we need to do it, here’s what happens if we don’t. Our approach removes that issue.

What this means is that the partner you select has to have expertise in more than just the technical area. When we were doing partner selection, we knew we needed someone who would help educate the university leadership, the community, etc. Having the right messaging helps build the buy-in not only locally at UND, but statewide.

How did sustainability factor into the project?

Pieper: Campus-wide sustainability efforts helped free up additional money for the project. We’ve worked to identify as much operational savings as possible by making energy-efficiency improvements across the campus. We’re at around $1M of cost reduction as a result of these improvements—lighting, variable speed pumps, and dealing with deferred maintenance in our mechanical systems. We took money from that and reinvested it into the steam plant project.

Beyond that, the reality is we just have a pretty unique campus. Compared to other flagship or land-grant universities, we’re extremely efficient with our energy. If we’re not the top, we’re close. That, to me, is a reflection of us wanting to do the right thing. We want to be efficient and sustainable. About 80% of our electricity is hydro—very clean!

Of course, there’s a huge financial component to that sentiment. North Dakota is a very conservative state, and we want to use the least energy possible. That sustainable approach has really not led us astray economically. For this project, we did look at coal, and we ran the numbers, and we decided that for various reasons we were going to go with a natural gas plant. There are huge environmental and sustainability benefits to doing that, but also some good fiscal return, too.

Based on your experience, what kinds of schools/campuses are good candidates for a project like this? Where is a P3 not the right answer?

Pieper: I think all schools and campuses are good P3 candidates. I think P3 is a strategy, and I’d prefer to look at an issue via multiple strategies. Everybody should run it to the ground in terms of what the strategy is, what the impact is, and compare it against whatever you may have anticipated being your strategy. If nothing else, doing that helps validate the decision you’re making. So I can’t think of anybody that just outright wouldn’t be a good candidate. Since the P3 concept is unlimited in its approach, you can address most issues by changing the approach you’re using.

If there’s one thing out there that might be a bigger hurdle, it’s legal constraints. Before doing anything else, I looked at state statutes, board policy, etc. Sometimes there are restraints and you have to ask yourself, Is it worth the time to try to go change those laws and policies?

What advice would you give fellow higher ed administrators who are considering a similar project?

Pieper: When you engage a partner, the effort is about more than just building or designing a facility, it’s also about communicating and selling the concept to the right stakeholders. I tell everyone that your partner should have a strong PR team or firm that’s centered in the state you live in, so they know who you need to talk to. It also helps to have someone with legal expertise in the state, so if opinions need to be drafted or reviewed, they have a working relationship with the attorney general’s office.

Another piece of advice: I think it’s important that the partner spend its own time and resources to say it also thinks there’s a project there. Find that partner and say, Look, this is the information we have and this is what we need out of the project. Now you need to go do your own due diligence. We’re not going to pay you a dime until you come back to us and say you ALSO think there’s an opportunity within our parameters. After that point, that’s when it makes sense to share in additional development costs. I don’t want to get all the way to the pre-development agreement and hear the partner say the parameters are off; that has to happen sooner.

Want to learn more about this innovative infrastructural work? Johnson Controls has issued a press release with additional details, and media outlets like the Grand Forks Herald have repeatedly covered the project’s progress.

has served as the Chief Facilities Officer for the University of North Dakota for the last 3 years. He is an innovative servant leader and change agent with 20+ years of public sector experience—including 17 years as a Chief Financial & Operations Officer. He is driven to engage others in finding solutions for complex problems that affect multiple constituent groups. His expertise is in the following areas: public sector capital funding/financing and corresponding state policy; building community support for capital planning, construction, and tax support; high performing buildings; and data-driven planning. He holds undergraduate and graduate degrees in School Business Management from the University of Wisconsin–Whitewater.