The “booming” higher ed housing P3 market: Exactly how much is it booming? 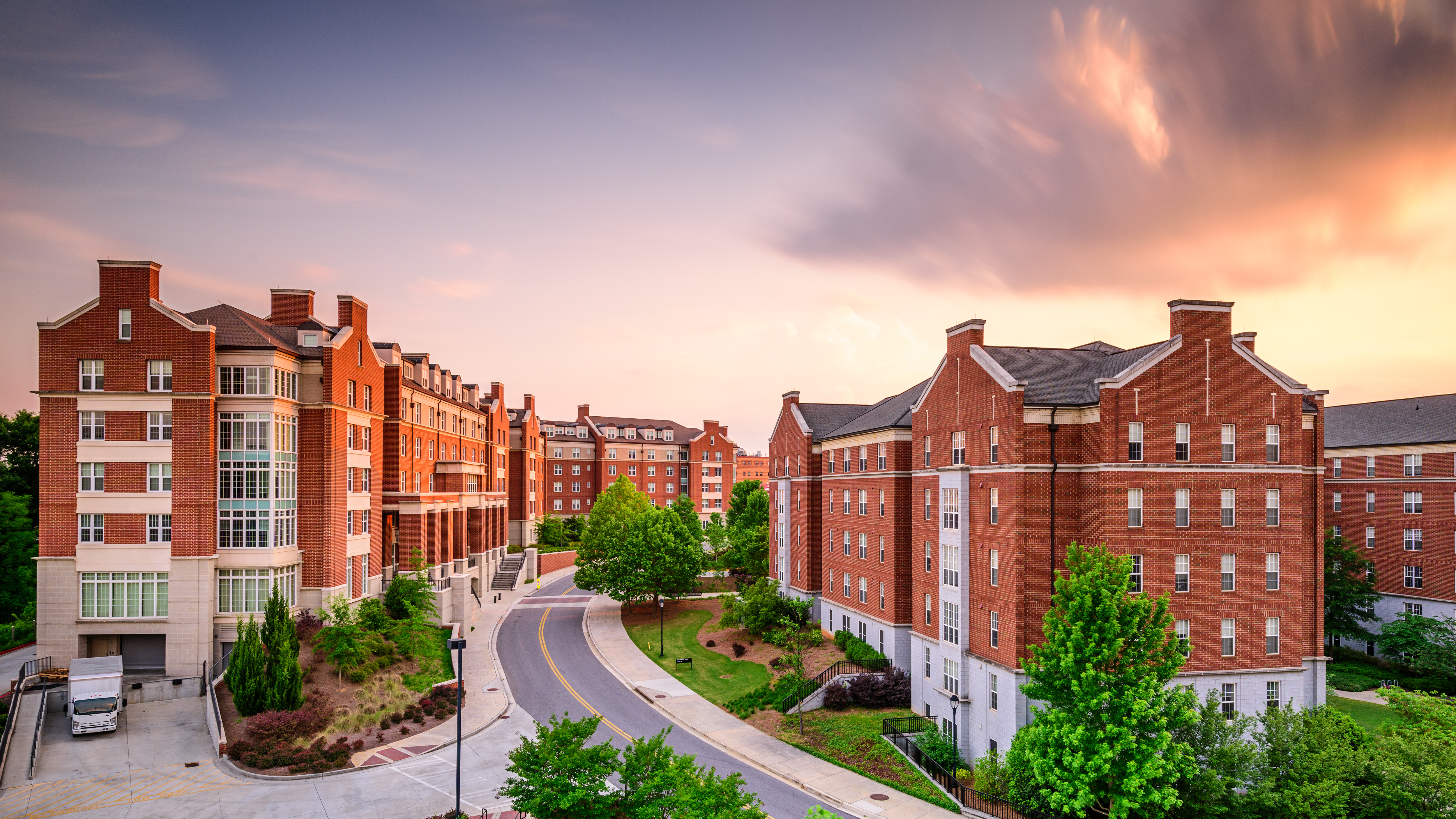 You’d be forgiven for assuming that the higher ed housing P3 market is booming. Print and digital publications have issued story after story in recent years about this growing market—more projects every year, bigger projects, more noteworthy projects. Likewise if you’re in the space, you see plenty of procurements out there. The concept of this booming marketplace can feel exciting. Our data suggests, however, that the word “booming” is a bit misleading. Parts of the market are growing—most years, at least a little. And the marketplace as a whole is certainly evolving. But it’s not exactly booming.

First, it’s important to note that there’s limited data on the higher ed housing P3 marketplace. Because there is no central clearinghouse for P3 projects, and because not all P3 projects make their way into the industry’s literature, no one has a 100% complete sense of how the market is shifting. However, Brailsford and Dunlavey (B&D) keeps and reports on a database of projects that close, and tracks projects that are “in the pipeline” but have not yet closed. Increasingly, the database also tracks asset types such as innovation districts, energy, parking, and athletics venues. B&D’s database tracks projects back to 2014 and through present day.

Here’s what the data from the Higher Ed P3 2019 “State of the Industry” report actually suggest about the “booming” higher ed housing P3 market, reporting on years 2014 – 2018.

The number of closings per year is dynamic, trending toward contraction 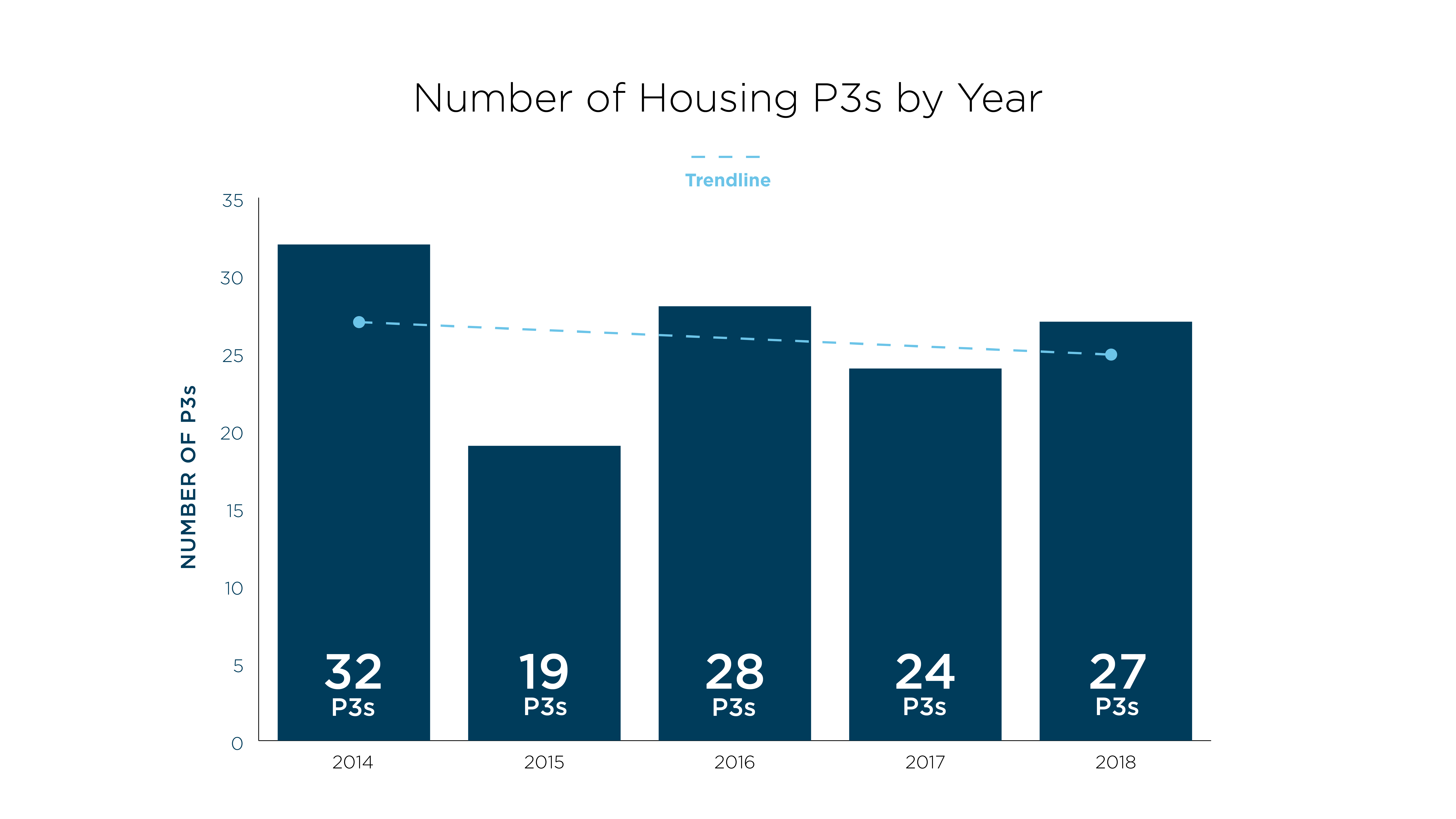 5 years, the database has captured 130 housing deals that have closed. Across those years, there is no clear, decisive movement that indicates the market is growing, yet alone booming. Instead, the data show a see-sawing market with—at least in recent years—a trendline suggesting modest contraction. Or if not contraction, perhaps settling—the average number of projects per year has been 26; the last three years have hovered right around that number, plus or minus two projects.

Something key to think about here is that procurement does not equal closing. It very well may be that there are plenty of potential projects out there, making it seem like the market is booming. But if some of those projects fail to reach financial close, which is often the case for a variety of reasons, that’s not much of a boom.

Average closing costs are also dynamic, but trending toward growth 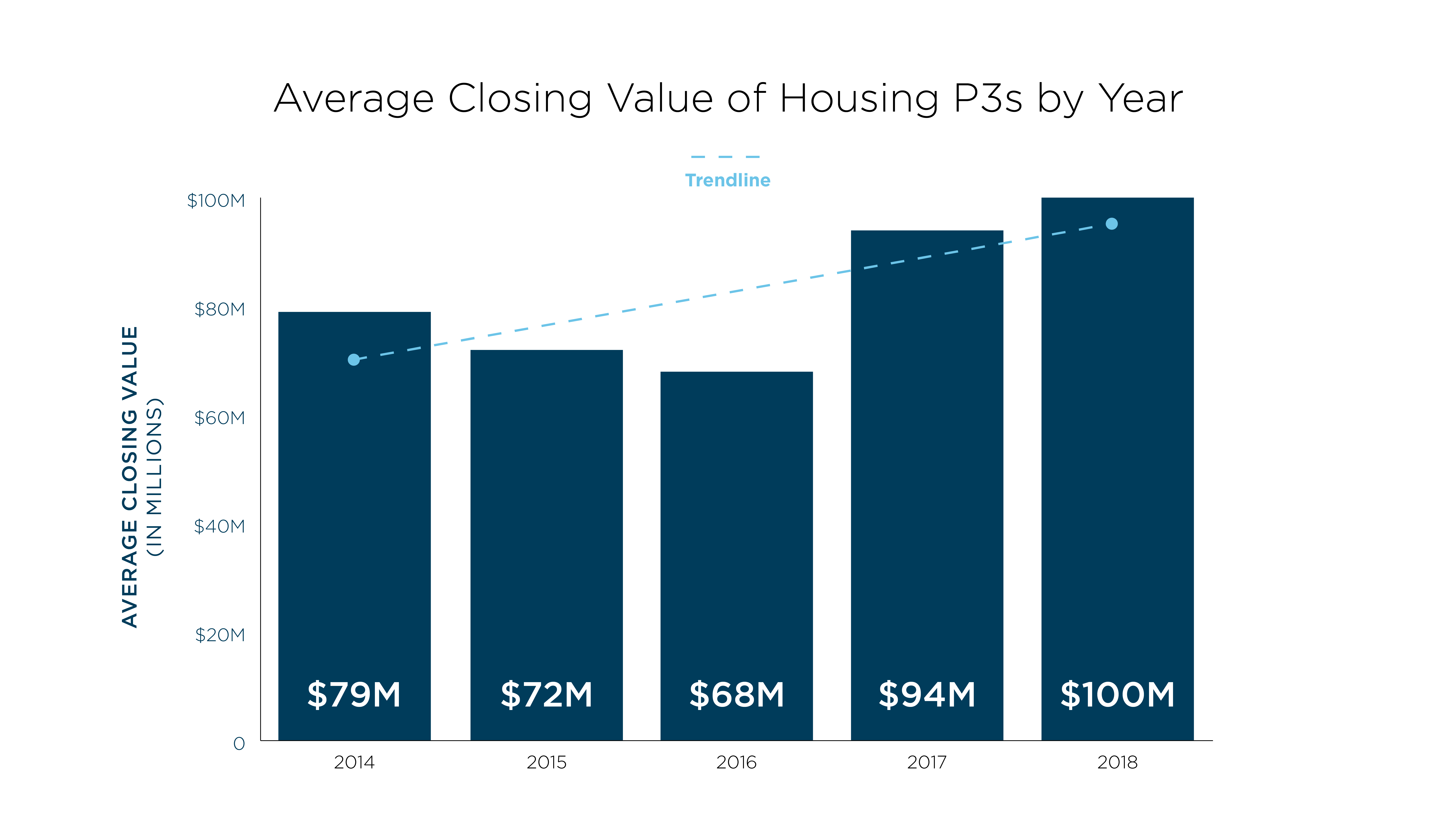 that do reach financial close, there is a bit to report here. Namely, while the average closing value for housing P3s since 2014 has not grown in a way that can be described as “booming,” this trendline at least is moving up. After seeing modest decreases for several years, the data show a big jump from 2016 to 2017, and movement toward an even higher average closing value in 2018. 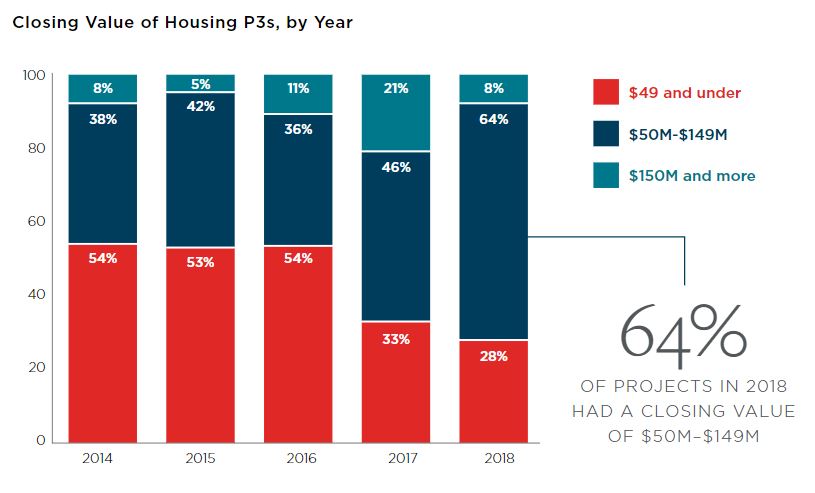 The cause of this apparent growth in projects with a closing value of $50–$149M might suggest that projects are being bundled. Or, perhaps there is no meaningful trend here—just rising construction costs. And further reasons yet are entirely possible. 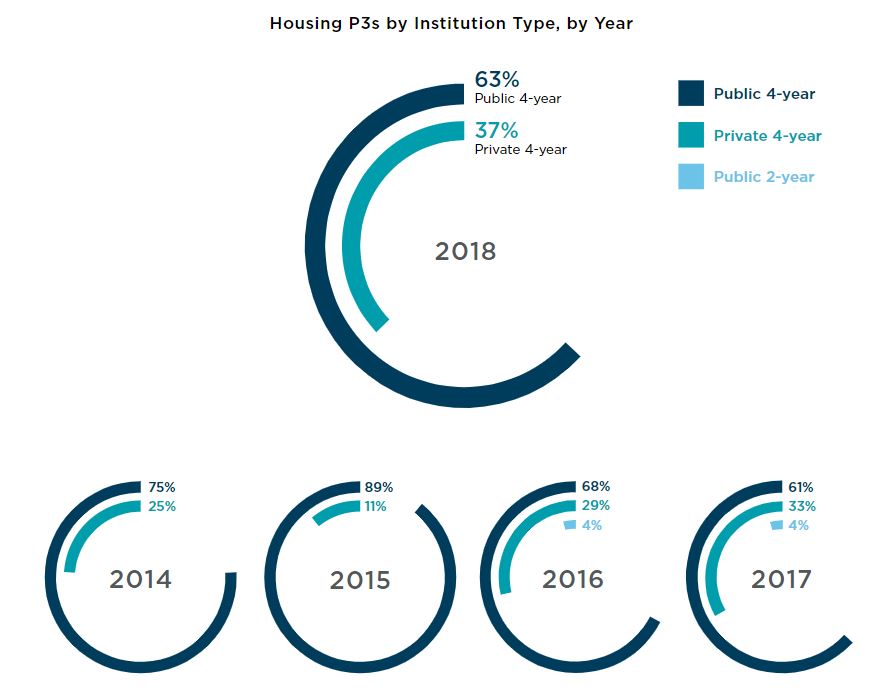 ed housing P3 market in private 4-year schools, specifically. The data show a steady trendline of growth in this space. The 5-year low for projects closing at private 4-years was 11% of projects (2015); the 5-year high was just this past year (2018), with 37%. Now that’s booming.

Based on the dynamic quality of this data, it’s hard to say confidently that 2019 will see more housing P3 projects closed and larger projects closed. It seems entirely possible, but the opposite would not be terribly surprising, either.

We can reasonably expect to see a continued interest in the private 4-year space, and it seems likely that projects with a mid-range closing value will continue to represent a large proportion of all housing P3 projects closed.

So there’s growth in housing P3s. And there’s certainly movement. There’s just not exactly a boom—and that’s okay. P3s are neither inherently good nor bad, they’re just another option. Only time will tell whether P3s take off and become the go-to financing and development method, or whether they shrink away. If the current data is any indication, reality will look like something in the middle.

Another thought in looking ahead, then, is looking beyond just housing P3s. As mentioned earlier, B&D’s database increasingly tracks P3 projects taking place with asset types such as innovation districts, energy, parking, and athletics venues, among others. While the housing space has been earnestly exploring P3s for a few decades now, some of these spaces are or can feel newer to partnerships. It will be interesting to see where P3s take off, if anywhere.

Finally, the idea mentioned at the beginning of this article is critical—that all of the “booming” talk might in fact not be about seeing more and more successful projects, but about seeing more and more schools issuing RFQs/RFPs and procurements. Of course, if more and more projects are starting but the same or a similar number are reaching financial close, that would suggest an increasing percentage of projects are failing to meet financial close. And that would be a significant issue for the marketplace—an issue all parties would benefit from better understanding.

For now, what we can share is that more and more schools might be exploring P3s as a form of practicing due diligence. But it’s expensive to pursue determining if there’s value in a P3. And it requires a lot of human capital. Therefore schools must find a way to be confident that, if there is value in a P3, they will actually be able to reach financial close. That means not just working with an advisor, but with the right advisor—one who truly understands how this process works and where the pitfalls are, and one whose track record proves success.

an executive vice president at Brailsford & Dunlavey and has been with the firm since 1994. Currently, he oversees B&D’s higher education and P3 practice groups. He has a diversified program management background that includes work on over 400 assignments in almost every state in the country. Mr. Turner is a highly sophisticated engineer of complex financial models that test the performance of facilities under a wide variety of market conditions. A respected thought leader for the firm, Mr. Turner is considered a leading national expert on that subject. He is a frequent lecturer on campus real estate; campus life facilities such as student housing, athletics/recreation, and dining; town gown issues; and P3s. Read his bio.

in B&D’s communications initiatives as Content Marketing Manager. She oversees the development of the firm’s content such as newsletters, feature articles, and social media. She has been writing about the building, construction, and related industries for more than 13 years, and is especially interested in opportunities and challenges related to higher ed campus development (e.g., Opportunity Zones, TIFs, innovation districts, P3s, hotels / conference centers, energy). Read her bio.